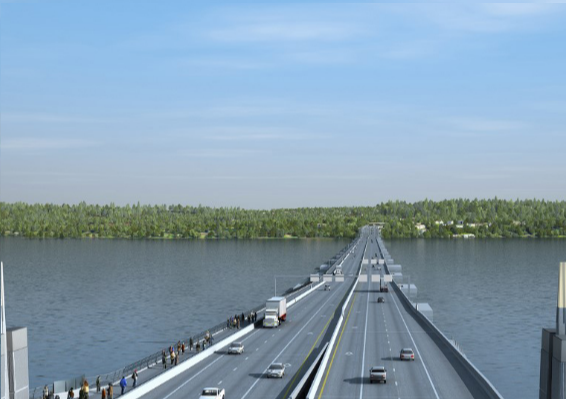 How to Keep the World’s Longest Floating Bridge Afloat

If there was ever a good test of the effectiveness of your expansion joints, it would be to recruit 7,000 cyclists, 12,000 runners and 27,000 pedestrians onto the world’s longest floating bridge in its inaugural 24 hours.

And this is exactly what happened for the Gov. Albert D. Rosellini Bridge, more commonly known as SR 520 Bridge, on April 2 – the weekend of the project’s opening celebration. The party included a 10-mile run, 20-mile bike ride, and fun fair on the bridge complete with a ribbon cutting ceremony.

Connecting suburbs such as Bellevue, Washington, with the city of Seattle, the original SR 520 Bridge was built in 1963 as a four-lane toll bridge and needed to be replaced due to increasing population and traffic, as well as general deterioration. Its replacement exceeded its length by 130 feet.

“Every bridge moves due to wind or from traffic, which introduces vibration onto the bridge. That vibration has to be absorbed by some element of connection,” said Rodrigo Miranda, Mageba’s SR 520 project manager.

“For being a floating bridge, it has some vertical movement because of the water level rising. The design of the bridge makes it able to take a 20-foot drop based on the water level of the lake,” Miranda said.

In fact, the nine modular expansion joints (TENSA MODULAR LR-LS) that Mageba provided can handle longitudinal movements of more than six feet each (2,000 mm). This, combined with 27 single gap joints (TENSA-GRIP RS) that can handle movements of up to three inches (80 mm), means that there is a lot of room for movement along the bridge’s length.

The joints all use Hamilton Kent Expansion Joint Seals as a part of their design. The rubber seals provide plenty of elasticity within the expansion joint while keeping it watertight. Mageba, a global company with most of its manpower based in Turkey, decided on Hamilton Kent as their local supplier when they started doing business in the U.S. in 2011.

“We’ve been working closely with HK for all of the joints that we have provided in the U.S. so far,” Miranda said.

The largest joints in the SR 520 project have 16 gaps in them. This means up to four feet of longitudinal service movements and five feet of extreme limit state movements. This requires a tremendous amount of flexibility and durability from the rubber HK seals.

“Each joint as a whole system is designed for maximum movement,” said Miranda, who noted that the bridge has more than 30 pontoon sections. “The movement gets distributed along the whole bridge.”

Over the summer, contractors will continue to disassemble the original bridge, which runs parallel to the new bridge. Meanwhile, pedestrians, cyclists and motorists using the new bridge are enjoying record-breaking times on their commutes across Lake Washington.