A Nod to the Past With an Eye on the Future

A city on the rise in the 1930s, Dayton, Ohio had doubled in size from the time just a few decades previous when Orville and Wilbur Wright changed the world from their Dayton shop, imagining and inventing the world’s first motor-operated airplane. Dayton was an innovative place, and folks weren’t afraid to take chances and do things differently.

Somewhere during the 1930s, city engineers decided to buck the trend of combining sewer and stormwater flows into one system. With population growing rapidly in the United States, most cities were opting for combined sewers. So, when the combined sewer maxed out, such as during a heavy rainstorm, the excess sewage and stormwater would be diverted to nearby waterways. Dayton’s city planners must have wanted something better, because they kept their sewer and stormwater systems separate. And today, when most cities are spending billions of taxpayer dollars to comply with mandates from the Environmental Protection Agency to separate their combined sewers, Dayton is spending far less and shoring up its system with a new sewer line that will run alongside the 1930s-era sewer trunk line that is still operational.

The Dayton Parallel Interceptor project consists of four phases that will run about four miles near the Great Miami River to provide redundancy with the original trunk line and protect the city from catastrophic failures.

The project brings together design engineering firms RA Consultants and Arcadis, which are handling separate sections of the project, with the City of Dayton, Army Corps of Engineers, Ohio EPA, and several environmental and transportation groups. Years in the planning, installation started in March of 2018. The second phase of the project is scheduled for completion in the fall of 2020.

“Being right by the river, with the groundwater, we knew we had to avoid floatation,” Martin said. That eliminated plastic pipe. Too unwieldy to surround plastic pipe with concrete deadweight. “The other challenge was that the existing cross section is a box shape with a triangular bottom,” Martin said. “We wanted to mimic that shape.”

Since the typical box culvert is a basic box, the V-shape bottom, which facilitates flows during slower periods, would need to be added. No problem. Encore Precast would build a mold and cast the box in the exact shape the designers envisioned.

“Once we decided to go with a precast structure, we had to work out the joint,” Martin said. Watertightness is critical in this system, since it not only runs along the river, but it runs near a water main in some places. The City of Dayton wanted assurances that the system would not be compromised at some future point by inflow and infiltration at the joints. Hamilton Kent won the bid to supply the gaskets. It was a new process for the designers and the city, and, like their forefathers who built the original sewer line, the group was ready to commit to a new, modern system that brings with it some long-lasting advantages.

“Nobody within 200 or 300 miles had ever installed a gasketed box culvert before,” said Alan Siebenthaler, territory manager for Hamilton Kent. “So it was a bit of a challenge because it was hard to point to a local job where this was being done. We had to rely on our experience working with companies that are from other parts of the country.”

The expertise needed to be developed in precision crafting of the custom box, installation of the gasket and then testing the seal to provide proof of design that the seal would hold at least 13 psi. To further complicate the picture, the clock was ticking.

Once the contractor awarded the bid to Encore Precast, they wanted pieces fast. “From the initial PO to first pieces on the ground when we started manufacturing was probably less than six weeks,” said Chuck Ehlers, owner of Encore Precast. “We had to source equipment, build molds, and get the gaskets. It was a remarkably tight timeframe for a new gasketed product that required sourcing equipment and molds. But things came together pretty well,” he said.

“I was thinking, how are they going to pull this off?” Siebenthaler said. “They had to quickly purchase the equipment and produce  quality, high-tolerance boxes, and then we had to provide some gaskets so they could do the testing.”

This was the first time Encore had produced a gasketed box culvert, but they were familiar with Hamilton Kent’s Tylox® SuperSeal™ because they use it for manholes. Still, the project required regular pressure testing at intervals for the 8-foot by 6-foot boxes, so Encore needed to find an efficient way to perform the tests on the large pieces. Most testing is done horizontally, where the boxes are pushed together and then need to be restrained to conduct the pressure test.

“To efficiently, effectively, and safely test the joint, we designed an innovative way to test the boxes by stacking them vertically and then testing them,” Ehlers said. “We turned the boxes on their side and set one box on top of the other, using the weight of the box to create a tight seal for the test.”

The experience of Hamilton Kent’s team combined with the ingenuity and craftsmanship of Encore Precast helped make the project a success. The precast boxes needed to be precise to ensure a watertight joint, and Encore manufactured pieces with tolerances in the range of plus or minus 0.040 over an 8-foot span.

“You’re talking plus or minus hundredths of an inch,” Siebenthaler said. “It’s a tolerance you couldn’t even measure with a tape measure. It requires great care in production, that’s for sure.”

Encore’s original plant location is just north of Hamilton, Ohio, about 40 miles southwest of the project location. But the company recently opened a second location in Dayton, which is conveniently located “right down the street” from the project, Ehlers said. Encore is supplying about 1,000 pieces for this 1-mile phase of the project.

With several months to go before the completion of the second phase, the project was staying on schedule, said Larry Kremer, P.E., project manager for the City of Dayton. “We are anxious to bid the 3rd and 4th phase of this project in the fall of 2020.” When the project is completed in 2023, the city will double the capacity for a critical sewer line that services about 90 percent of the population.

“Our plan is to basically have both in service, but we will have the ability to take either one out of service so that we can do maintenance and repair on the other one,” Kremer said. The two sewer lines converge at large junction stations at either end. The junctions include interchange chambers that enable the flow to be switched from one line to the other by dropping stop-log gates to divert the flow.

In addition to the watertight Hamilton Kent gasket, the Ohio EPA, which is the regulating agency for the project, wanted a “second line of defense,” Kremer said. “So, we put a mastic on the vertical face (of the box) to give it a second layer of protection.”

So while other cities are struggling to meet EPA mandates, Dayton is shoring up its sewer infrastructure to meet demands that go well into the future when it is likely that climate change could precipitate more frequent, heavier rains that could cause flooding events that would overrun a combined sewer system. From his seat as the project manager, Dan Martin can look at the project with some historical perspective.

“I think Dayton is pretty fortunate in that regard,” he said. “Many cities are dealing with these wet weather issues and Dayton just doesn’t have it to the same degree. They owe their forefathers a great debt of thanks because they are able to focus resources to build some redundancy, where other cities are scratching just to get to a level playing field.” 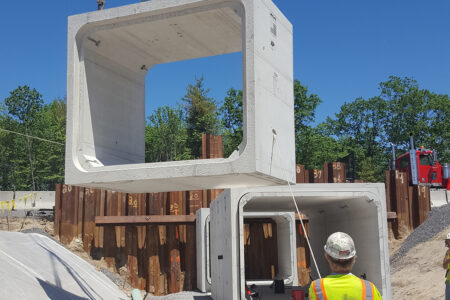