An Expansion Joint Seal for an Iconic New Bridge

As infrastructure projects go, long-span bridge construction ranks among the largest, most expensive and highest profile ventures on the planet. A major bridge project is typically years in the planning, followed by years of construction, with thousands of workers at a cost of billions of dollars. Iconic structures, they become part of a city’s skyline and integral to its identity.

The Samuel De Champlain Bridge is one of those. A cable-stayed bridge that replaced a crumbling 1960s era span, the new 2.1 mile (3.4 km) bridge passes over the Saint Lawrence River in Quebec, linking the island of Montreal with the South Shore suburbs. A major lifeline between the U.S. and Canada, it is the busiest bridge in Canada and is one of the largest infrastructure projects in North America in recent years. At 60 meters (200 ft) wide, it is the widest cable-stayed bridge in the world that uses two planes of cables. It carries four lanes in each direction, includes a lane for pedestrian traffic, and will eventually have a light rail line running down the center.

The $4 billion (CAD) project provides safe, efficient movement of vehicles, unlike the bridge it replaced, which is 100 meters upriver and evoked some nervous times when portions had to be shut down for safety reasons.

“It was literally corroding from the inside out because of all the road salts we throw in the wintertime, and poor drainage on the bridge,” said James Fuoco, C.E.T., Hamilton Kent territory manager and Montreal resident who regularly drove over the bridge.

While the old bridge became dangerous and obsolete after 57 years, the new Samuel De Champlain Bridge was designed with a 120-year lifespan in mind. Even the asphalt decking is meant to provide a smooth ride for 15 years.

The only thing a traveler might notice when driving over the bridge is the occasional bump-bump-bump that interrupts the hum of tires on asphalt. Those are expansion joints spanning the width of the decking, and they play a critical role in ensuring a long life for the bridge. Each expansion joint is a grid of 10 small I-beams precisely engineered to enable the bridge to expand in the heat and contract in the cold. And clipped between each of those I-beams is a Hamilton Kent rubber seal that keeps the bridge watertight.

The expansion joint seal was perfected over four years of testing between Hamilton Kent and Canam, one of the major contractors for the bridge. The largest steel fabricator in North America, Canam manufactured 600 box girders for the approaches to the new bridge and 160 girders for the Île-des-Sœurs bypass bridge, which was part of the project. Canam also manufactured steel superstructure for three overpasses located on Île-des-Soeurs.

Mathieu Gaudette, Canam quality assurance supervisor, worked with Hamilton Kent to develop the expansion joint profile. It was an ongoing process that included a lot of back and forth, he said.

“The draftsman produces a drawing, but drawing and reality are different, right?” he said. “So Hamilton Kent would do the mold exactly matching the drawing. But then the steel comes out differently.” The process continued through several sets of revisions with HK’s Fuoco working between HK’s product development group and Gaudette’s team.

“We would extrude a small amount of material and send them a sample of about six feet,” Fuoco said. “They would test it at their facility and take it through AutoCAD for very precise dimensions. There would be minimum and maximum dimensions that had to be respected, and so we would have to fine tune where necessary.”

The expansion joint works like an accordion, opening and closing to accommodate movement, and the rubber seals have to move in concert. It’s a delicate balance between strength and pliability.

“We would receive a section,” Gaudette said, “and then we would clip it in to see how well it would hold. It has to be strong, but not too much because then you can’t clip it and it’s too hard to install. So there is a balance of tolerances there, and that’s why it took five or six revisions.”

Watertight Expansion Joint Seals
Once the Hamilton Kent profile was perfected, Canam needed to get approval from the consortium overseeing the construction of the bridge. And once that approval was secured, assembly began at the Canam factory. The joints were assembled at a precise temperature of 59° F (15° C), which provided a mid-range set point that could then be adjusted to the current temperature during installation at the jobsite.

“A bridge structure moves a lot, especially up here,” Gaudette said. In Montreal, summer temperatures can top 90° F, (32° C) dropping below 0° F (-18° C) in the winter. The sun beats down on the structure and it expands. Then it cools and contracts. The expansion joints and the bearing underneath the bridge enable the bridge to move and relieve stress. The Samuel De Champlain Bridge has 20 expansion joints distributed along its 2.1 mile (3.4 km) span to accommodate that movement.

“Expansion joints have to be watertight, so when the joint opens up, water cannot go through,” Gaudette said. “That’s where the Hamilton Kent rubber seals play their role. They go in between the metal structure to keep the bridge deck watertight, so there’s no moisture, or ice or road salts, coming through, which provides the bridge with a long lifespan.”

The Samuel De Champlain Bridge opened to northbound traffic on June 24, 2019, Quebec’s national holiday. Southbound lanes opened July 1, Canada Day. Travelers passing over the bridge these days may barely notice the breaks in between the asphalt where the expansion joints are letting the bridge slowly expand and contract. But for the Canam and Hamilton Kent team that developed the expansion joints, those breaks represent their role in bringing online an iconic structure that will be part of the region’s landscape for at least the next century. 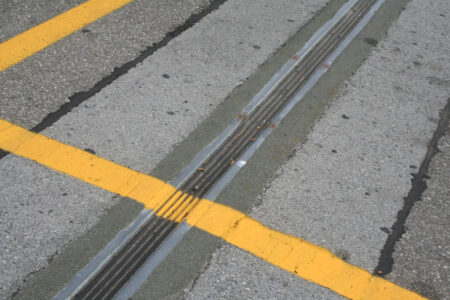