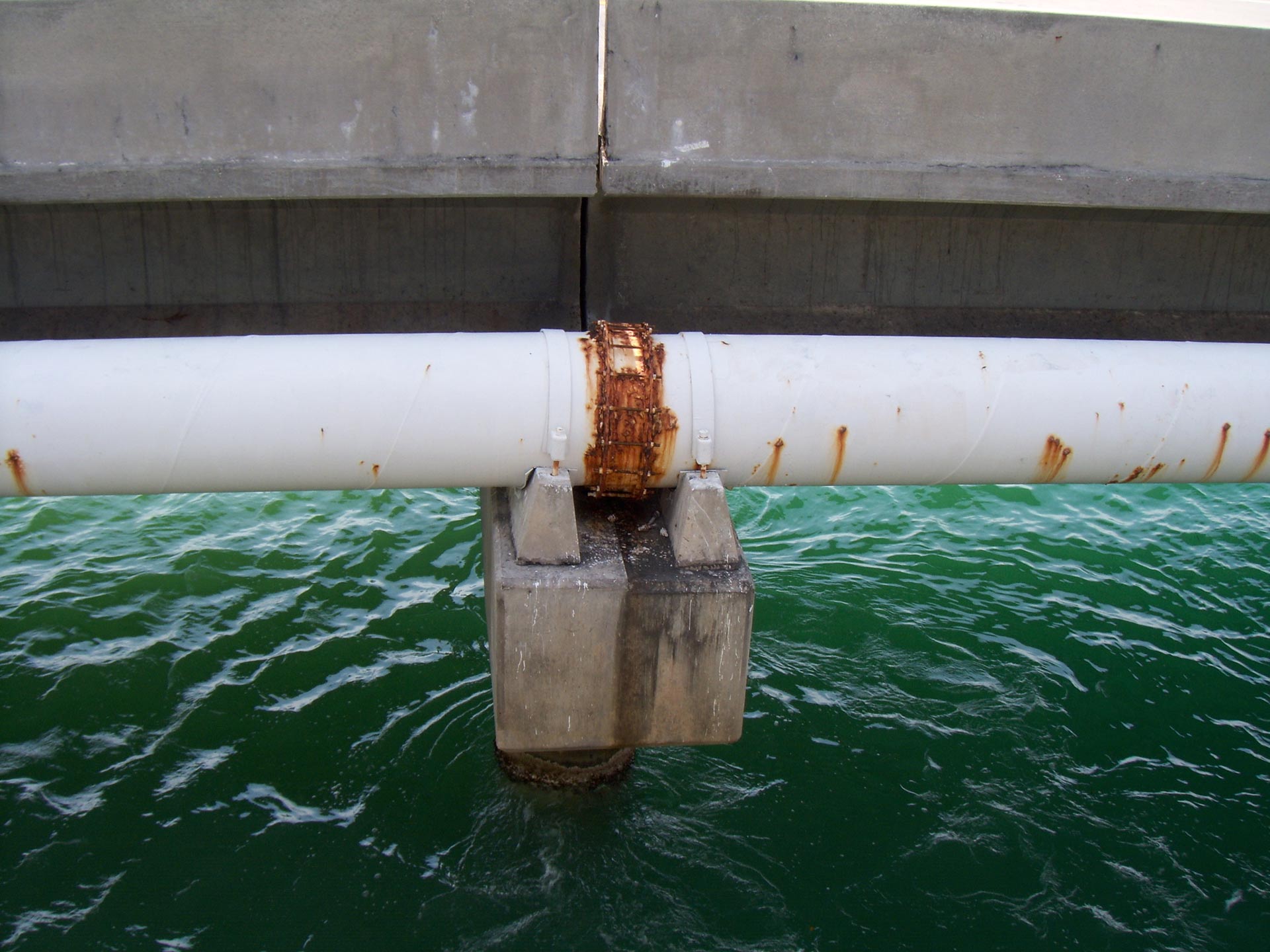 The 25,000 inhabitants of Key West, the iconic tropical enclave at the tip of Florida, receive their drinking water via a pipeline. This critical 125-mile (200 km) pipeline is buried underground on land and mounted on the side panels of the 42 bridges between Miami and Key West. Four booster pump stations and several water reservoirs ensure a reliable supply and compensate for fluctuations in pressure and volume.

Since water is continuously being removed from the pipeline by the communities between Miami and Key West, the diameter of the pipe decreases from 36” (914 mm) at the start of the pipeline to 24” (609 mm) at Key West. The salty, humid air and yearlong tropical temperatures produce a corrosive climate that damages the old drinking water supply pipes, especially around the joints.

Under continuous renovation, the pipes needed to remain in service for as long as possible. The original pipe connection was a non-separable double-sealing ring coupling that needed to be replaced.

The STRAUB Open-Flex 4H provided the perfect solution for maintaining this critical water infrastructure for the Keys. With its coupling design that enables it to be easily installed on existing pipes, the Open-Flex 4H saved the contractor considerable time and money. The Open-Flex 4H consists of two half-shells and a separated rubber collar that can be individually placed over the pipe ends and then attached with tensioning screws.

Outfitting the pipe with the original-style connections would have required replacing whole pipe sections in some instances, which would have meant deploying heavy construction equipment. This would have caused ongoing disruption on the heavily traveled Highway 1. That type of work would have slowed the project significantly because the contractor was allowed to block only one lane of the road for a maximum of eight hours at a time. And, the disruption of the drinking water supply had to be minimized.

The simple assembly of the STRAUB Open-Flex 4H allowed six couplings to be exchanged every eight hours. The actual installation of the couplings took only 20 minutes each with most of the time spent dismantling the old couplings and cleaning the sections before installing the STRAUB coupling.

Two additional key features benefited the Keys project. STRAUB couplings are self-contained. There are no loose screws, nuts or washers that need to be assembled by the installer. The entire coupling is light and easy to handle.

Also, due to the unique design of the sealing lips located on the edge of the STRAUB gasket, a low torque of only 48 ft-lb (65 Nm) is required to tighten the screws on each coupling, which is about half the torque required by the originally installed couplings. This ensures that the existing pipe, which was already weakened by corrosion, would not be overburdened. The existing installed couplings required 88.5 ft-lb (120 Nm) to create a seal, which stressed the pipe and decreased the lifespan of the coupling seals.

The progressive sealing effect is an important characteristic of the STRAUB Open-Flex 4H. The special cross-section of the sealing device is designed so that it becomes more effective with increasing internal pressure in the pipe. Because of this, and due to the elasticity of the sealing material, it was not necessary to grind down the seams of the spiral-soldered pipe. The housing and seals of the STRAUB coupling are made from robust galvanized steel, designed for an operating pressure of 200 psi (13.8 bar), test pressure of 305 psi (21 bar) and an operating temperature range from -4° F to 176° F (-20°C to 80° C). The special insert strip allows for a gap of up to 3.15” (80 mm) between pipe ends. The coupling compensates for an axial shift of up to 1% of the pipe diameter and misalignment of up to two degrees.

After talking with the client regarding replacement of the corroded pipe couplings, STRAUB developed a coupling specifically for the Keys pipeline application. Due to the significant width of the new coupling, STRAUB acquired special machinery and tools to manufacture the components. The experience of the STRAUB engineering team meant that support could be provided throughout the process – from manufacturing of the couplings through installation.