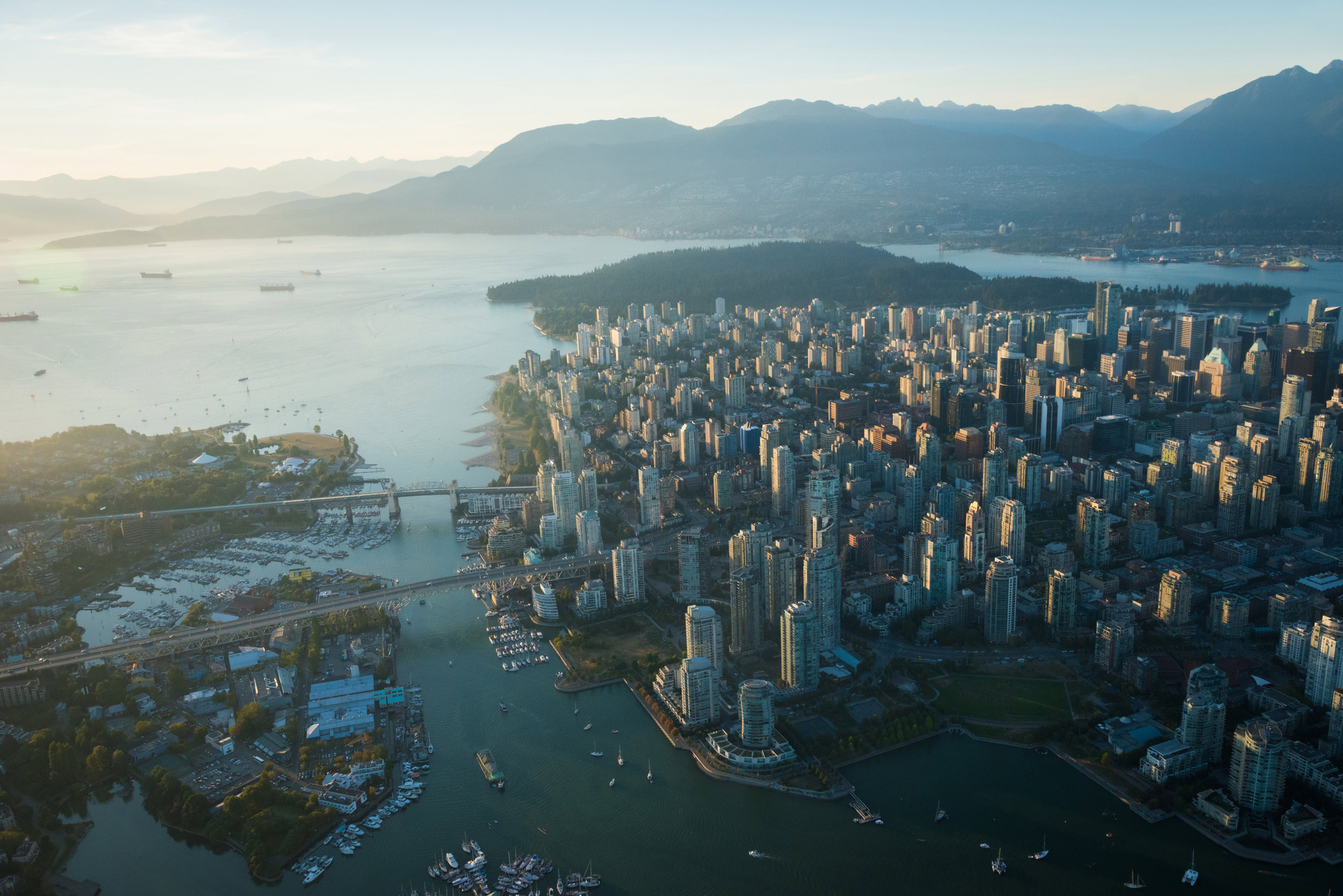 Nothing Small About this Microtunnel

A Specialized Gasket for a Unique Project

The term microtunnel can be a bit of a misnomer. When the pipe you’re pushing behind the tunneling machine is 10 feet in diameter, there’s nothing “micro” about that type of construction. In fact, everything connected with the South Surrey Interceptor sewer tunnel is massive. It is the final phase of a 20-year project started in 1999 to expand the sewer system to enhance environmental protection and keep up with the fast-growing region around Vancouver, B.C.

The microtunnel runs parallel to the original 1970s-era South Surrey trunk line that moves sewage to the Annacis Wastewater Treatment Plant. The miles of twinned sewer line installed in the last two decades have been mostly open cut, with large excavations closing roads and disrupting commerce. But this last phase, known as Johnston Road Phase 2, is happening mostly underground.

Mike Jokic, senior project engineer for Metro Vancouver, the project owner, introduced the project in a video showing the tunnel boring machine being lowered into the caisson to start the tunneling: “This project is unique, because it is the largest diameter pipe installed via microtunnel,” he said. “It’s the largest in Canada, and as far as we know the largest in North America for this methodology.”

The original Phase 2 design included two open cut sections, both located near the major intersection of 152nd St., Highway 10 and the Benchmark Business Centre. Ward & Burke presented the trenchless tunnel as a solution to mitigate disruption by going underground.

“Back in the ‘70s, this was mostly open field, so they could just dig a hole and put the pipe in,” Jokic said in the video. “Today, obviously, development is quite extensive, and that’s why we are putting in a tunnel rather than an open cut. We’ll be tunneling under three business parks and two roads, including 152nd, which is a major route full of other utilities, so this is definitely a unique project.” 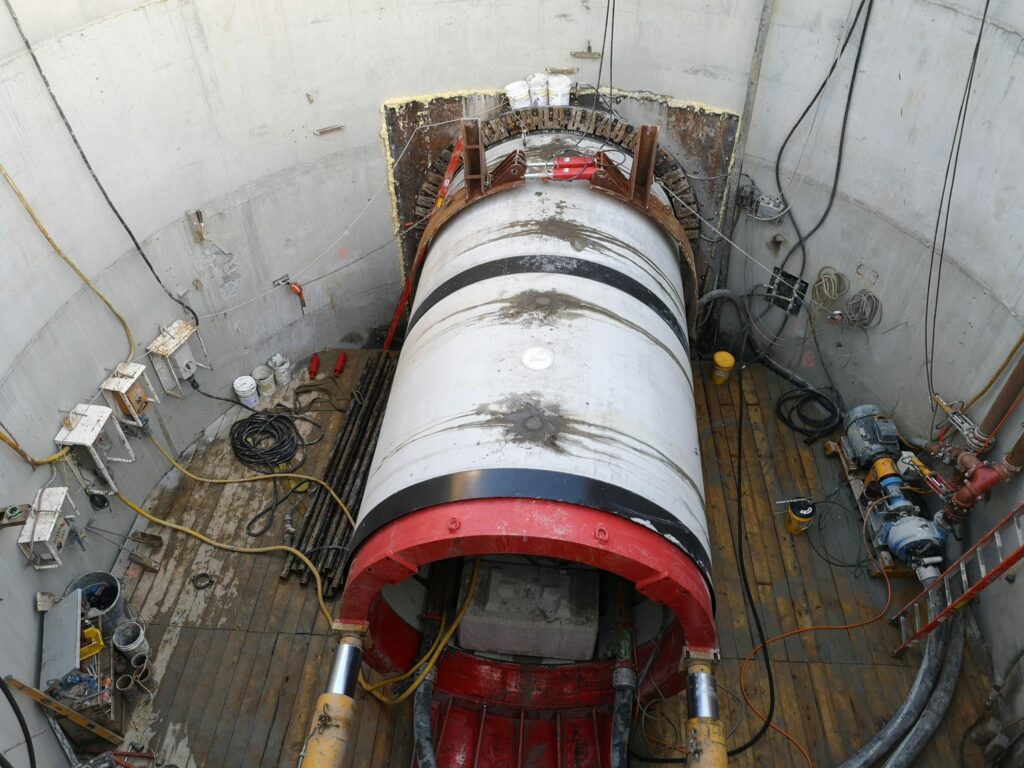 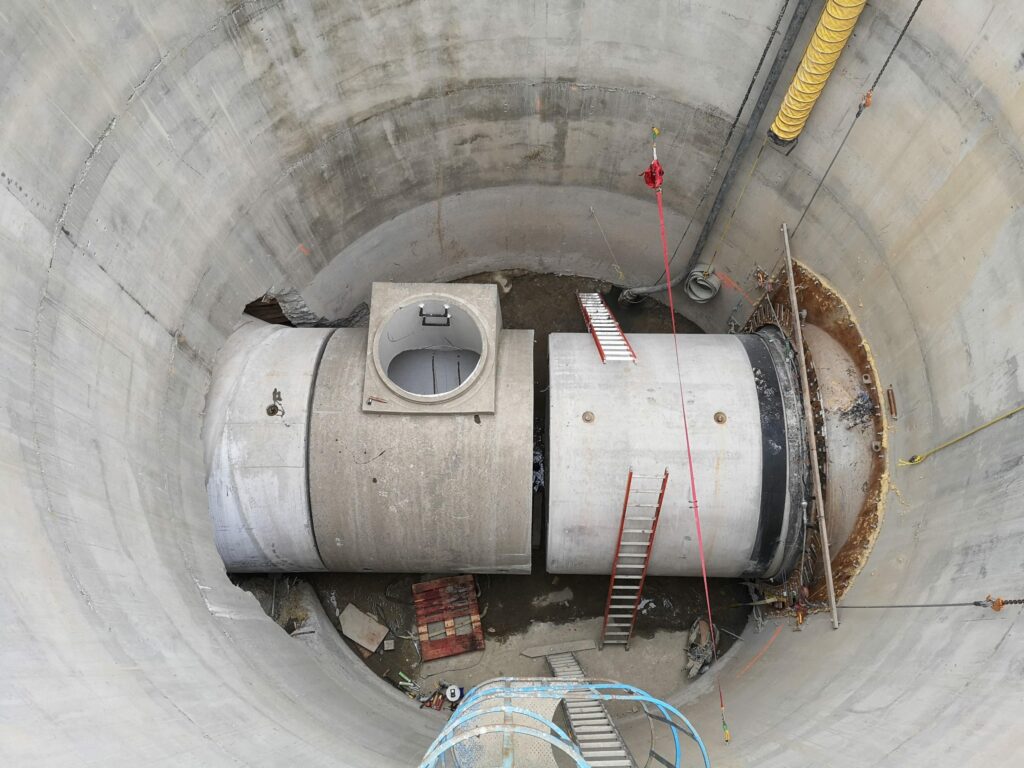 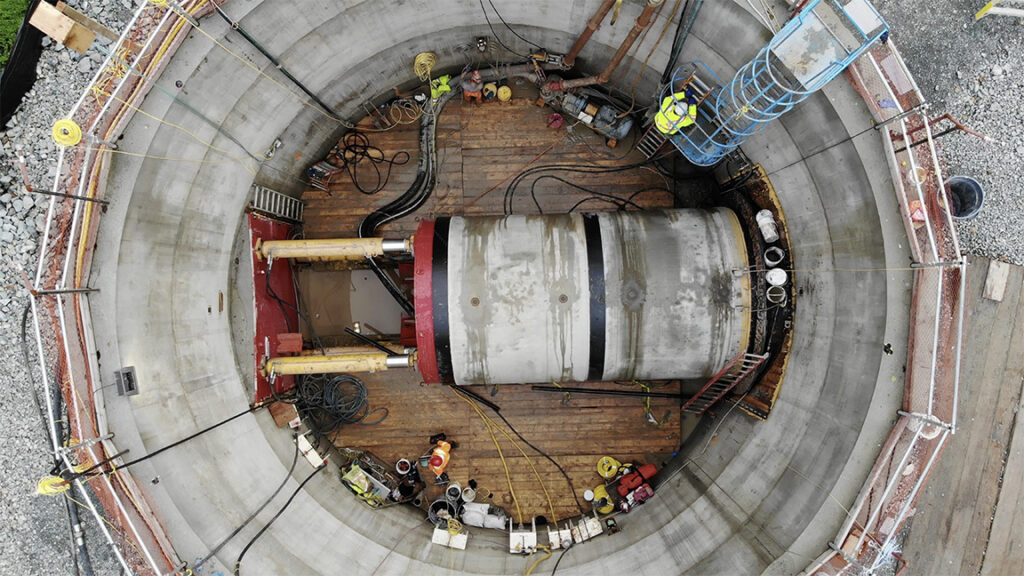 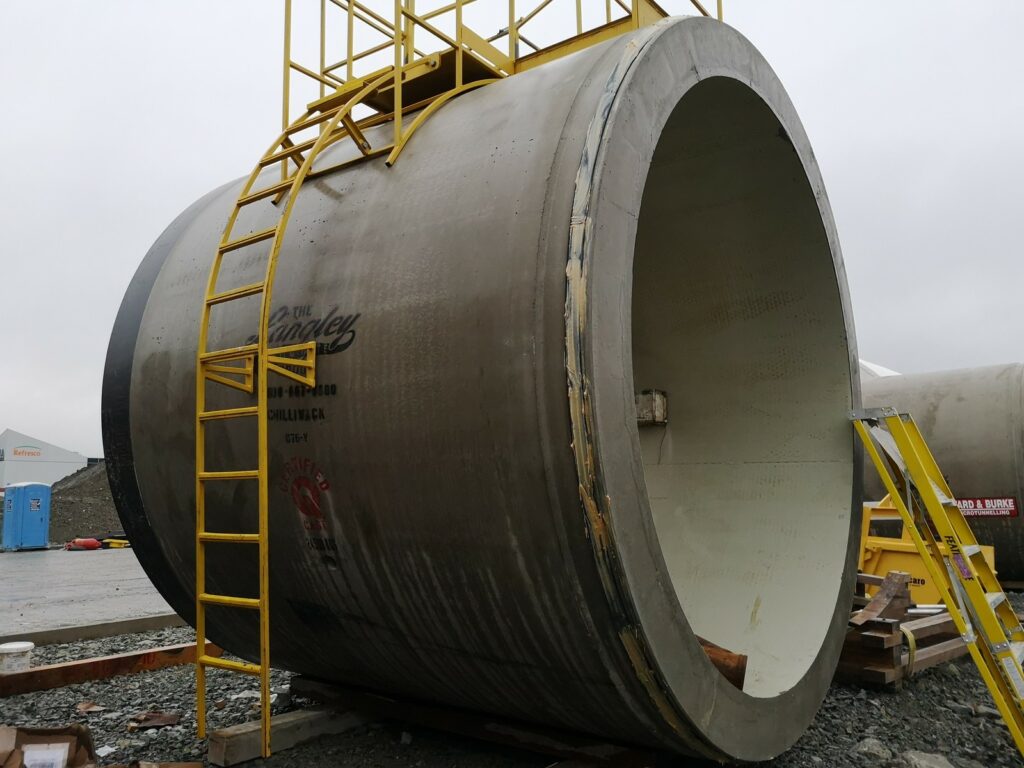 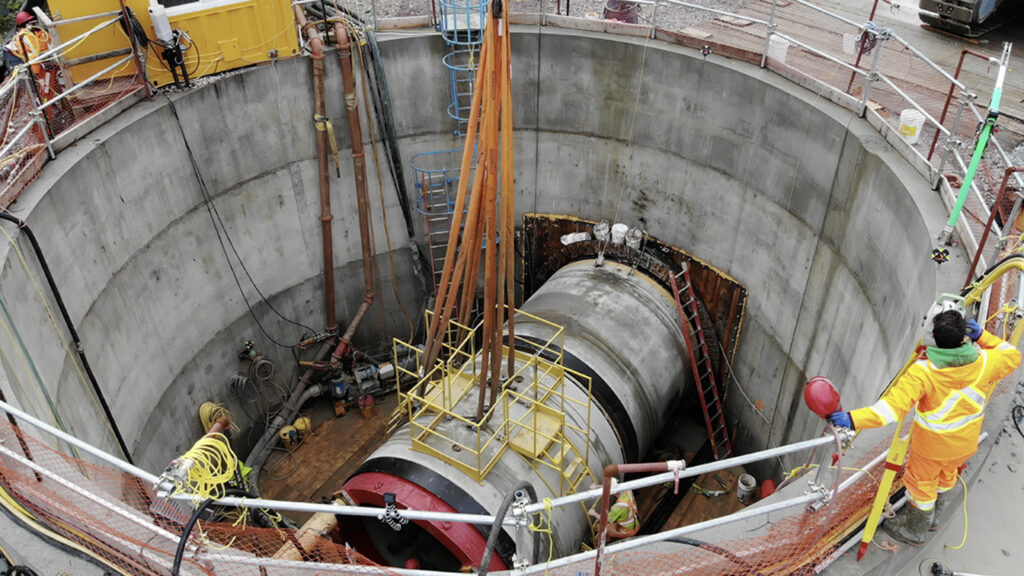 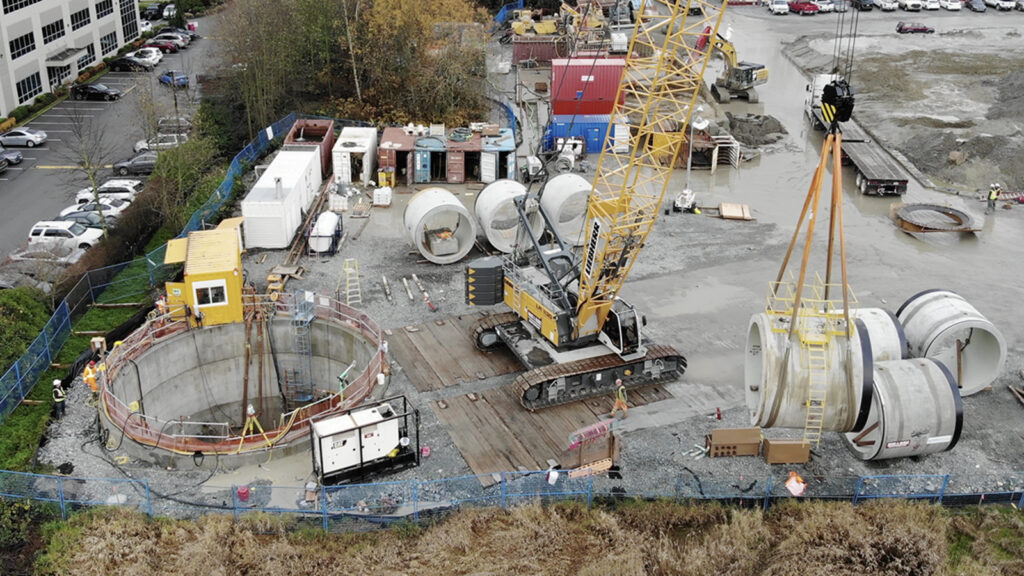 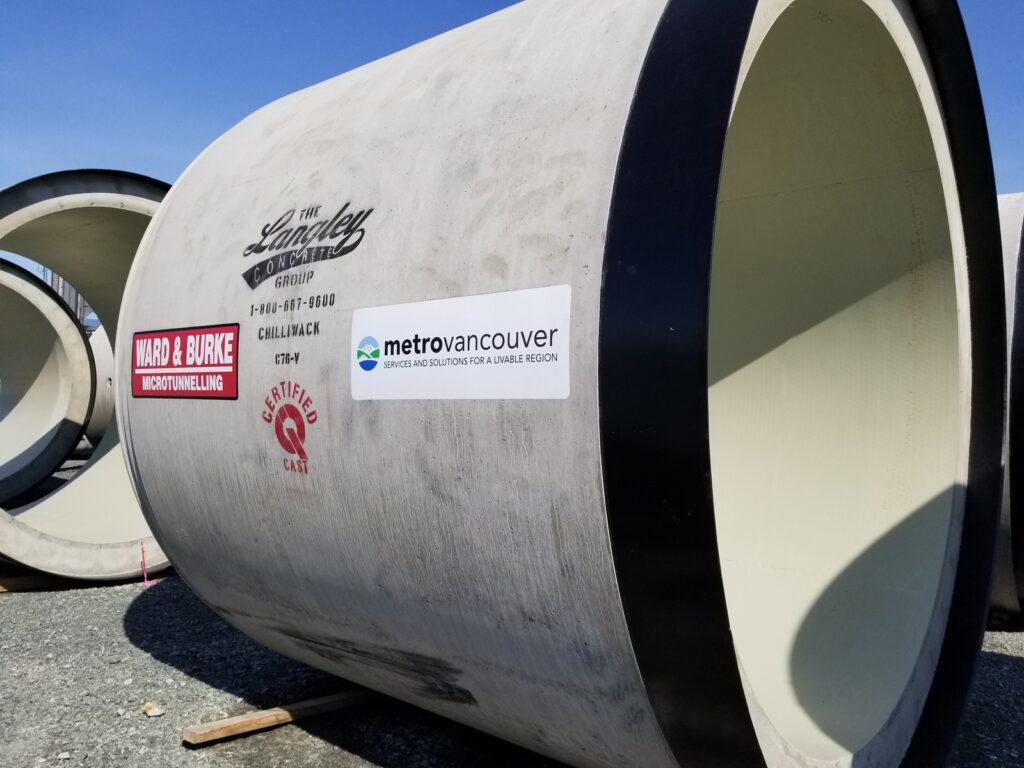 Joel Shimozawa, P.Eng., technical marketing engineer with Langley Concrete, described the microtunneling process. “They lower a tunnel boring machine down into the jacking pit, and they’ve got a hydraulic jacking system braced against the wall. They start tunneling, utilizing water under pressure to excavate the face of the wall,” he said. “They turn that excavation material into a slurry and they continuously drop in these jacking pipes that are specially designed for the application. They are wetcast, and they have a tailskin, or a bell-band, cast into the bell end of the pipe, so it’s not your typical pipe joint. It’s quite specialized.”

The Ward & Burke microtunneling process includes very precise formwork, which they supply to the precaster for wetcast pipe production. Concrete jacking pipes are wetcast, because they need to have a higher resistance to strain. Similarly, the gaskets must be able to withstand up to 100 psi of external pressure, which is much higher than for typical open cut installations.

The contractor pays close attention to the specs, because it considers every link in the chain to be critical. In pipe jacking, each pipe segment is thrust into the ground, one after the other, building a “pipe chain” underground of increasing length and weight, incrementally building stress in the pipe. Any failure of an individual pipe segment or joint at any point along the alignment can have potentially devastating consequences to a project.

“We designed our gasket to the specification requirements for this project,” said Jason Clowater, Hamilton Kent business development manager. “Ward and Burke was able to provide us a framework for this gasket design, as they have years of experience working on these projects internationally.”
A second gasket – a blocking seal – provides a watertight connection between the water and the steel collar at the tailskin and also supports and secures the position of the main gasket, Clowater said. The block seal serves as a sort of secondary gasket.

“It also helps to seal against the external pressure exerted by water and protects the steel collar against aggressive substances flowing within the pipe,” Clowater added. Hamilton Kent did not provide the block seal for this project, but has since developed its own block seal for microtunneling applications.

Microtunneling “is an unbelievable thing,” Marshall said. “With smaller pipe, I get it. But with large pipe – 10-foot diameter pipe – to push that through the ground. It’s amazing.”

Langley Concrete Group produced the wetcast reinforced concrete pipe with HDPE linings under strict specifications using forms supplied by Ward & Burke. The forms are extremely precise, Marshall said. Just as precise are the gaskets, which contribute a major environmental piece to the puzzle.

“The job here was a large trunk line,” Marshall said. “The pipe has to be watertight so the sewage doesn’t leak into the ground. If you have leaking you have serious problems, especially with pipe of that size and the volumes that would be going through it.”

In microtunneling, every link in the chain needs to be strong. It’s a big responsibility, and Hamilton Kent’s watertight joint seal stands up to the challenge. 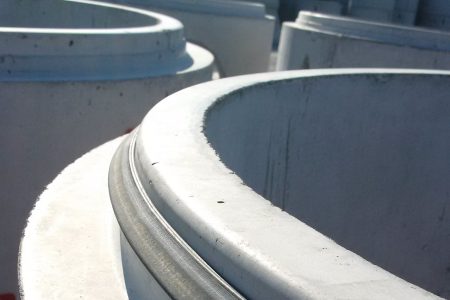